I’ve been doing the Mens Health SOTF Race for a few years now in Cardiff. It gets better each year. I remember a few years ago, the obstacles weren’t great but I always enjoyed it because the atmosphere
was always fantastic. Nowadays Rat Race/Mens Health have upped their game, lets be frank they had no choice, there are so many good obstacle races raising the bar each year that they have to improve to stay in the game. 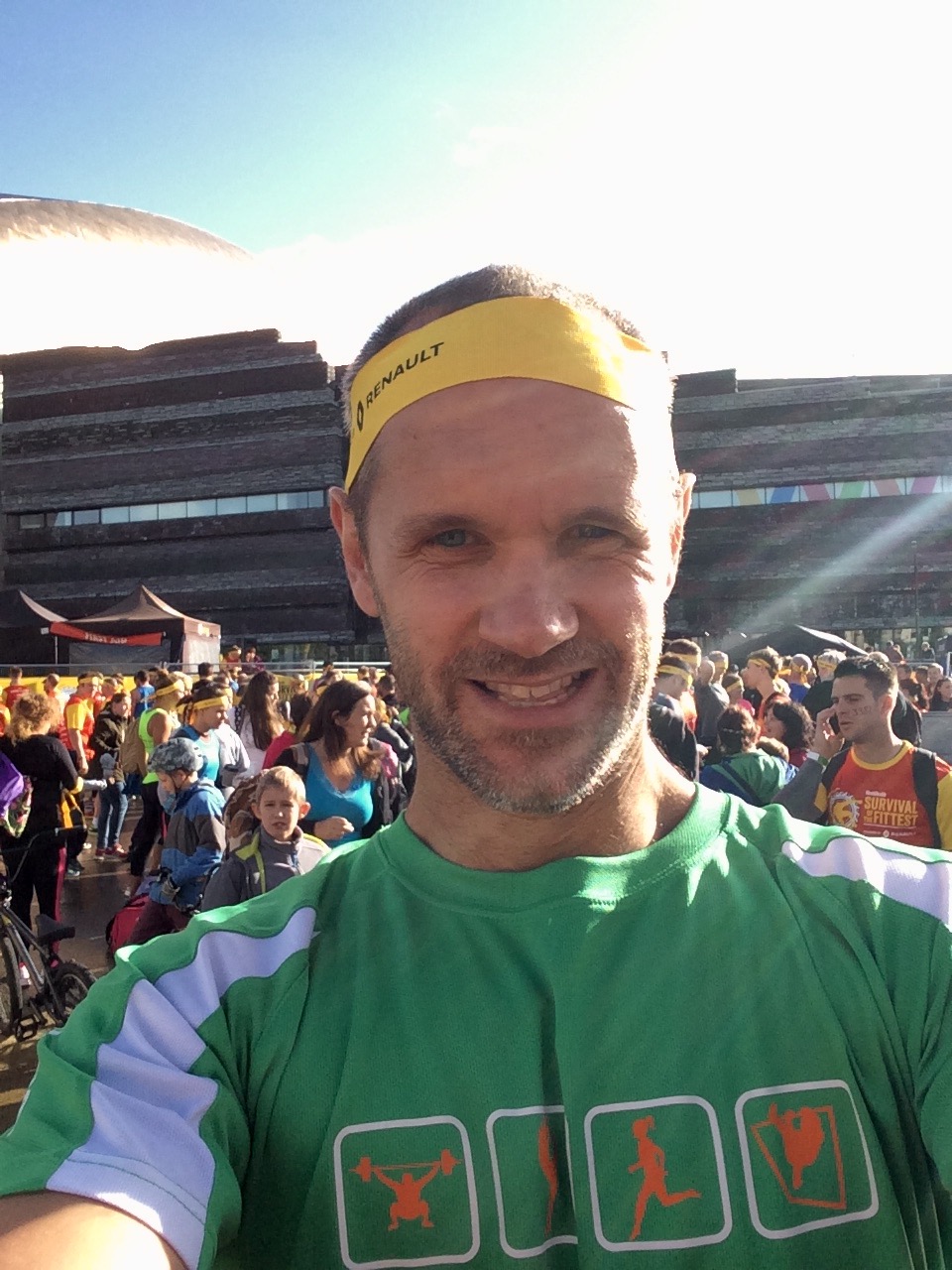 This years race was in my opinion the best so far. I took things a bit more seriously this year. Booked the elite wave and decided I was going to race it properly and go for a decent time. Up to now i’ve been running each year
with a team for fun, which is also awesome fun, but this year I just fancied having a go at it properly. Out of curiosity really to see how well I could do if I had a clearish run at the obstacles and some seriosuly fast OCR’ers around me to push me.

Well the race delivered. I turned up at about 8.30 am to pick up my race number and t-shirt. This is the only race I know of where you get the tshirt before you start the race. Not a bad idea for them really as it means most of the competitors tend to wear their survival
tees making for some excellent promo photo’s for RatRace/Mens Health! Me though, I always wear my obstafit tshirt. Besides it makes it easier to spot myself in the photo’s after if im the only one wearing bright green!

I was a little bit nervous for this race since I was running it on my own and aiming to race it – this was relatively new territory for me really. I always push myself at races, but only this year have I decided to have a real crack at competing properly.
When running for fun as per usual, nerves dont really come into it, just excitement. Add a bit of pressure into the mix and the nerves kick in a little bit!

I ran around like a nutter 10 mins before the start trying to find the bag drop only to find out it was unmanned and not secure I guiltily left my bag with my pregnant wife! Luckily she had Cai with her and the pram so managed to squeeze my bag into the shopping basket under the pram!
Eventually I made my way to the start of the race – got into a good position literally right at the start, facing Pete from mudstacle who was filming some of the mudstacle boys also doing the race. I managed to get about a second of fame in their promo vid of the elite front runners,
take a look it’s a brilliant vid!

The gun went off and everyone raced towards the haystacks. Me I was a bit slow off the mark here for some reason, underestimated the pace at the beginning and almost got crushed by a huge crowd of people surging over the haystacks. Next time I know to sprint from the start!
That fast pace continued. The mudstacle boys, in particular Ross Brackley absolutely pegged it at the beginning, they left everyone for dust pretty much. I looked at my garmin about a quarter of a km in, we were running at 3:15 mins per km. Ha, that pace didnt last long.

I decided to play it cautiously and dropped my pace back to about 4:15, that also happened to be my target half marathon pace for next week so this was going to be good training for that. The race was going well for the first km or so before we hit the white water rapids.
I grabbed my life jacket and helmet and carefully got in the water. This is definately one of the highlights of the race. For those that haven’t done it, its basically a white water rapids centre (usually meant for rafts not runners!).
You basically put on a life jacket, get on your back and let the water carry you rapidly to the bottom.

I was pretty confident at this point. I know im a strong swimmer and in the past this has always been a straightforward obstacle for me. Let the water carry you then a small swim at the bottom to reach the side.
However this year, I got my timing slightly wrong when I reached the bottom of the rapids. There a bunch of marshalls in boats shouting to everyone to swim across the river to reach the side. I tried to do so but failed for some reason, the water just carried me further down the river
around the boats. I tried to swim against the current but it was useless, the strength of the water was amazing. So I resigned to the fact Id have to wait until the current slowed, then swim my way back. There were a lot of people in the same situation all around me.
I didnt panic as I knew eventually the rapids would slow/stop, allowing me to swim back – I was just well annoyed that I managed to lose a good 7 minutes in the process 🙁

So eventually I got out of the water and set my mind on a mission to make up some time. I ran like a lunatic for several kilometres, overtook quite a few runners. The obstacles were good fun and creative – I wouldnt say any where massively challenging, but you can see that MH are trying out new ideas.
Each of the obstacles at this race are grouped into zones (extreme zone,indutstrial zone, container city…you get the picture). I didnt really take in the fact that obstacles were in zones, it’s all much of a blur to me, I just remember the obstacles that were the most fun.
There was a huge jump off a platform onto a giant airbag below which was great fun. The jump I reckon was about 40-50ft. Quite a drop, and probably quite a scare for some people! A big slide was also new to this years race.
A strange scaffold slide which was basically two pieces of scaffold tied together down which you had to slide – not sure about that one! The rope climb was back this year. Obstafitters I hope you made use of what you all learnt at our rope climb master class 😀

Something that a lot of people find annoying (though personally I see it as a bonus!) is the fact that the race is never 10km, its usually closer to 12 or even 14km. This year I ran past techniquest down the bay knowing there was still another 3km at least to go. The marshall was telling people the finish line
was in sight, just round the corner. Yes it is in sight when you get round the corner but what they dont tell you is you have to do an extra 2km loop before you get to it. I’m glad I knew this as I managed to keep some energy in the tank for a sprint to the big wall at the finish then up the travelator. Anyone remember gladiators?!
A quick drop off a 10 ft wall then straight over the finish line.

I definately pushed the pace in the race more than I would usually but lost some considerable time in the water!! Happy though, I came 36th overall with a time of 1:05:45. Next time i’m going to beat the hour and get in the top 10!!